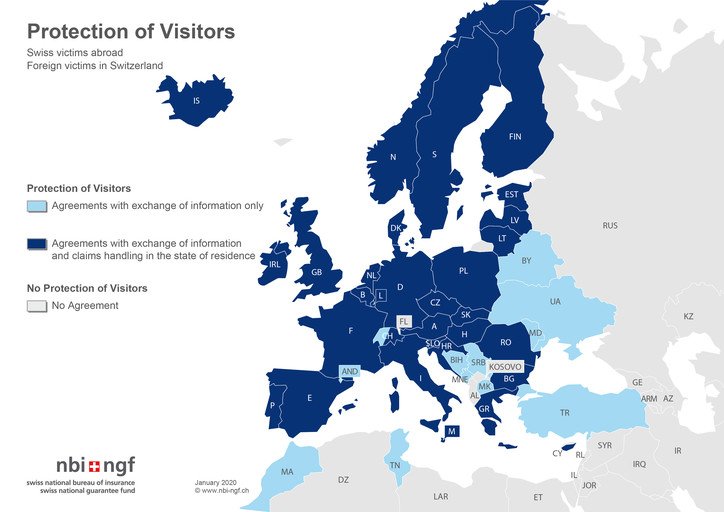 Switzerland does not fall within the scope of Directive 2000/26/EC. In order to enable road accident victims to benefit from the most important provisions for the protection of visitors, the NBI concluded bilateral agreements under private law with all the competent institutions of the EEA member states based on the competence to which it is entitled under Art. 76b para. 5 lit. b SVG.

The agreements are based on the provisions of Directive 2000/26/EC. Agreements with exchange of information (map above: states coloured light blue) provide that the information centres of the contracting states provide the persons concerned with the necessary information to enable them to assert their claims. Agreements with claims settlement in the state of residence (map above: states coloured dark blue) also require the appointment of claims representatives in the other contracting state to receive claims from injured parties. However, access to compensation bodies is expressly excluded in all bilateral agreements on the protection of visitors.

Agreements on the Protection of Visitors

with exchange of information

The NBI has concluded agreements on the protection of visitors with exchange of information with the insurance bureaux of the following states:

Claims will be settled in accordance with the applicable law. Unconditional acknowledgements or final settlements require the consent of the competent insurer. The insurer may at any time withdraw the claim from the claims representative appointed by it. However, he may not abuse this right to reduce the justified claims of the injured party. Where no claims representative has been appointed, this role may be performed by the insurance bureau of the injured party's state of residence, with the agreement of the competent insurer. The insurer may also withdraw the claim from the insurance bureau at any time. The agreements do not provide for sanctions to be imposed on the insurer or the claims representative if the injured party has not been given a reasoned reply to a claim made. The agreements also do not provide for the payment of interest on arrears or possibilities for withdrawal in the event of negligence. They do, however, introduce an obligation for insurance bureaux to notify each other in cases where claims are not settled properly.

The NBI has concluded agreements on the protection of visitors with claims handling in the state of residence with the insurance bureaux of the following states: