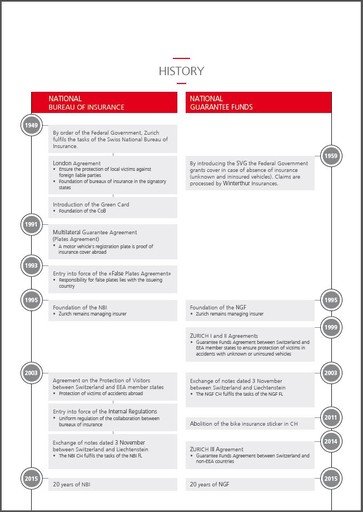 Origin of the Green Card System

Recommendation No. 5, drawn up by the United Nations Economic Commission for Europe (UNO - Road Transport Sub-Committee) in 1949, invited the governments of the European countries to ensure, by means of unified standards, that road accident victims receive adequate insurance cover in the event of an accident in which a foreign motorist becomes liable. The purpose of the Recommendation was therefore to improve the protection of victims of domestic traffic against foreign liable parties. It should be avoided that road accident victims have to pursue their claims abroad. In addition, the following objectives should be achieved. On the one hand, injured parties should not suffer any disadvantage by the fact that the accident was caused by a foreign vehicle (protection of road accident victims). On the other hand, motorists should not be held up by time-consuming and costly border formalities when entering another country, because they had to comply with the insurance regulations of the country into which they intend to enter.

In order to comply with Recommendation No. 5, insurance bureaux have been established in the member states of the United Nations Commission in Europe. These bureaux, which are recognized by the governments, are responsible for issuing international insurance cards - the so-called Green Card - which certify that drivers have adequate third-party liability cover when entering other member states. The bureaux are also responsible for covering damage caused by vehicles from other member states which carry such an insurance card. The Green Card system has thus brought about a standardisation of the insurance requirements for entry and harmonised the cross-border settlement of claims within Europe.

The insurance bureaux organised themselves within an umbrella organisation, the Council of Bureaux, and concluded various agreements in order to implement the principles set out in Recommendation No. 5.

In order to put the Green Card System into practice, the CoB has drawn up the agreement between bureaux, the London Agreement, named after its place of origin. The London Agreement is based on the following principles:

Through the Green Card, the issuing National Bureau of Insurance guarantees that the insured has sufficient insurance cover abroad, i.e. if there is an accident, this document provides cover amounting to the minimum sum insured at the time of the accident in the country visited. The Green Card is recognised by the member states like an insurance policy.

The Bureaux ensure among themselves that the expenses incurred for the settlement of claims will be reimbursed. The Bureau that has issued the Green Card must guarantee the reimbursement of all claims-related expenses with the proviso that the expenses must be substantiated by documentary evidence. First and foremost, however, the Bureau’s members (insurers) will have to pay these expenses. The actual sum refunded to the “Handling Bureau” is composed of the compensation paid, the external expenses for the settlement of the claim, and a handling fee precisely defined by the Council of Bureaux (CoB) for the purpose of covering all other expenses. This means that the sum that is refunded covers not only the actual compensation paid to the injured party but also a handling fee for the settlement of the Claim.

All National Bureaux of Insurance are nowadays also members of a central umbrella organisation, the Council of Bureaux (CoB). The CoB is responsible for ensuring that the Green Card System works properly. The CoB’s secretariat is in Brussels.

The London Agreement was replaced on 1 July 2003 by the Internal Regulations.

Under the "Multilateral Guarantee Agreement between National Insurers' Bureaux" - also referred to as the "Plates Agreement" - a motor vehicle's registration plates replace the Green Card as proof of the fact that the vehicle is covered by insurance abroad. As time went by, more and more countries issued registration plates only if vehicles were covered by motor insurance. As a result, motorists no longer needed an additional certificate of insurance. For this reason, many countries stopped checking motorists to see if they had a Green Card.

An EC Directive of the year 1972 reflected this development and provided that vehicles normally based in a member state of the European Community no longer needed a Green Card when entering another member state. This EC Directive provided a platform for the Multilateral Guarantee Agreement, which today applies not only in the European Union (and the European Economic Area) but also in Andorra, Monaco, San Marino, Serbia, Bosnia and Herzegovina, Great Britain, the Vatican and Switzerland.

Under this Agreement, the "territory in which the vehicle is normally based" always means "the territory of the State of which the vehicle bears a registration plate". This is important because, for the Multilateral Guarantee Agreement to apply, a vehicle must be normally based in the country of a signatory bureau. As the name indicates, this Agreement applies multilaterally among the signatory countries.

The Multilateral Guarantee Agreement was signed on 15 March 1991 and applied to accidents that had occurred after 1 June 1991. The principles of this Agreement continue to apply today in the new agreement, the Internal Regulations (Règlement Général), which entered into force on 1 July 2003.

The official "False Plates Agreement", which was signed by all the bureaux of the Multilateral Guarantee Agreement, entered into force on 1 October 1993. This Agreement provided that if a vehicle with false or falsified registration plates was involved in an accident, any resulting claim had to be settled by the country which had issued the last regular registration plates to the vehicle concerned. This provision remained in effect until the end of June 2003. Article 11.2 of the Internal Regulations, which entered into force on 1 July 2003, stipulates that if a vehicle with false registration plates is involved in an accident, the territory in which the accident occurred is deemed to be the territory where the vehicle was normally based; any resulting claim therefore has to be settled by the guarantee fund of the country in which the accident had occurred.

The Internal Regulations (French: Règlement Général), which were adopted at the 2002 General Assembly of the Council of Bureaux (CoB), entered into force on 1 July 2003. The Internal Regulations replace the London Agreement and the Multilateral Guarantee Agreement, and provide a single document governing the reciprocal relations between National Bureaux of Insurance. The principles of the former agreement continue to apply in the agreement now in force.

Agreement on the Protection of Visitors

The Agreement between Bureaux on the Protection of Visitors (EU/EEA) which the National Bureau of Insurance (NBI) has concluded since 1 February 2003 with all EEA member states have been another milestone in terms of improving the protection of victims of road accidents. Under these agreements, persons (visitors) who are victims of an accident while abroad can pursue their claims against the foreign motor insurer through the latter's representative in their own country of residence. The representative will settle the claims in accordance with the law of the country in which the accident occurred and as instructed by the foreign insurer.

Profile and Key Figures 2019 – Facts and Figures about NBI & NGF.